Microsoft’s stance for decades was that community creation and sharing of communal code (later to be known as free and open source software) represented a direct attack on their business. Their battle with Linux stretches back many years. Back in 2001, former Microsoft CEO Steve Ballmer famously tarnished Linux “a cancer that attaches itself in an intellectual property sense to everything it touches”. Microsoft also initiated its “Get the Facts” marketing campaign from mid-2003, which specifically criticized Linux server usage, total cost of ownership, security, indemnification and reliability. The campaign was widely criticized for spreading misinformation.

However, in recent years, there has been a partial shift by Microsoft to embrace the open source software paradigm. For example, some of their code is open sourced. Examples include Visual Studio Code, .NET Framework, Atom, and PowerShell. They have also made investments in Linux development, server technology and organizations including the Linux Foundation and Open Source Initiative. They have made acquisitions such as Xamarin to help mobile app development, and GitHub a hugely popular code repository for open source developers. And they have partnered with Canonical, the developers of the popular Ubuntu distro. But many developers remain hugely sceptical about Microsoft and their apparent shift to embrace open source.

This series looks at the best free and open source alternatives to products and services offered by Microsoft.

Microsoft OneNote is a note-taking program for free-form information gathering and multi-user collaboration. It gathers users’ notes, drawings, screen clippings, and audio commentaries. Notes can be shared with other OneNote users over the Internet or a network.

OneNote is available as part of the Microsoft Office suite. Here’s our recommended free and open source alternatives.

Joplin is a free, open source note taking and to-do application which can handle a large number of notes organized into notebooks.

The notes are searchable, can be copied, tagged and modified either from the applications directly or from your own text editor. The notes are in Markdown format.

Joplin was designed as a replacement for Evernote and so can import complete Evernote notebooks, as well as notes, tags, resources (attached files) and note metadata (such as author, geo-location, etc.) via ENEX files.

Tusk is billed as a feature-laden, open source, community-driven, free Evernote app used by people in more than 140 countries.

Each page can contain links to other pages, simple formatting and images. Pages are stored in a folder structure, like in an outliner, and can have attachments. Creating a new page is as easy as linking to a nonexistent page.

All data is stored in plain text files with wiki formatting. Various plugins provide additional functionality, including a task list manager, an equation editor, a tray icon, and support for version control. 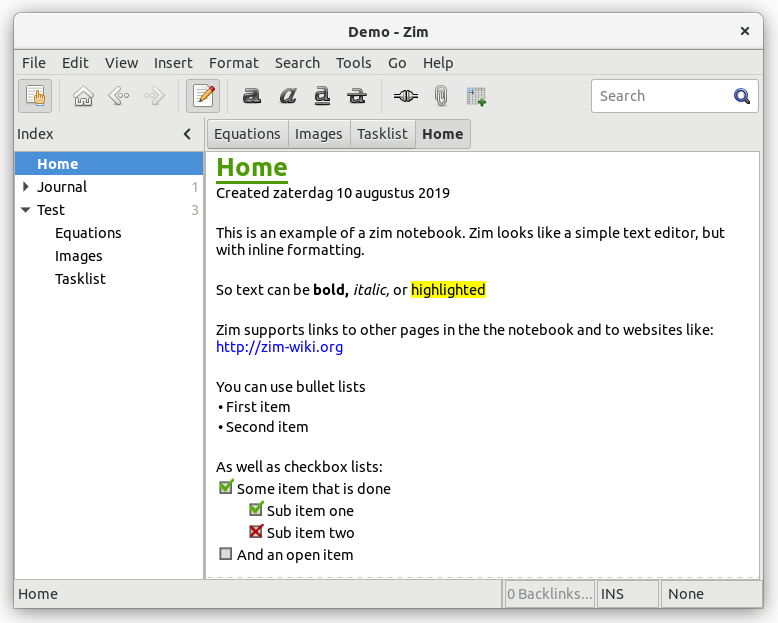 CherryTree is a hierarchical note taking application, featuring rich text and syntax highlighting, storing data in a single xml or sqlite file. It offers a good range of features.

All articles in this series:

Move away from large multinational software companies and embrace free and open source solutions. We explore alternatives for:

Manage your system with 31 essential system tools. We’ve written an in-depth review for each of them.