The vast majority of computer users depend on a graphical user interface, and fear the command line. However, the command line holds significant power and versatility. Commands issued from a shell offer system administrators a quick and easy way to update, configure and repair a system.

The benefits of the command line are not only confined to system administration. The ability to transverse the file system quickly, give more information about files and directories, automate tasks, bring together the power of multiple console tools in a single command line, and run shell scripts are just a few examples of how the command line can offer a potent, multifarious toolbox.

A screencast is a digital recording of computer screen output, often carrying audio narration. Screencasting software takes a series of screenshots of a running application, recording the user’s actions, and creating a video file. This type of software was brought into prominence by the commercial Windows application Lotus ScreenCam in 1994. The vast majority of screencasting tools capture a graphical environment. However, here we examine tools that capture your terminal sessions. Think of them as console screencasting tools.

Screencasts have a wide variety of uses. This type of software is often deployed to describe software projects, report bugs, and for evaluating technical skills. Plain text screencasting lets you explain and perform commands at the same time, simultaneously offering a tutorial and showcase. Further, plain text screencasting uses less bandwidth than video, and provides a powerful educational tool. 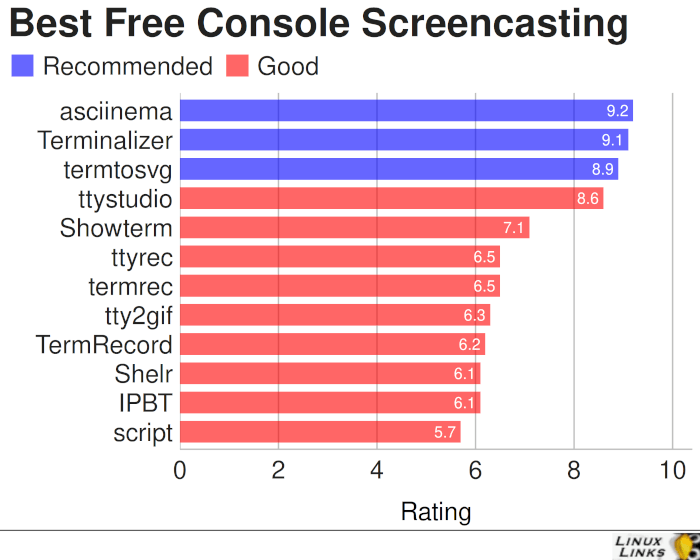 Let’s explore the 12 terminal session recording tools at hand. For each application we have compiled its own portal page, a full description with an in-depth analysis of its features, a screenshot, together with links to relevant resources. Start recording activities today!