This is a weekly blog about the Raspberry Pi 4 (“RPI4”), the latest product in the popular Raspberry Pi range of computers.

One area I’ve not covered to date is utility software. Nestling in the Raspbian repositories are a ton of utilities from the essential to the wacky. File management is definitely a routine but important activity for any desktop user. Recognizing that file management software is deeply personal (causing almost as many conflicts as text editors), I’ve looked at a good spectrum of file managers this week.

I’ve captured my experiences of the file managers I’ve been using on my RPI4 journey. There’s been delight and disappointment along the way.

I wrote a fairly detailed review about nnn only a few weeks ago. I’ll only comment here from an RPI4 perspective.

There’s a package for nnn in the repositories which is version 2.2. That’s not the latest version. And the latest release offers a number of notable improvements, so it’s definitely worth compiling the software for yourself. The steps are detailed here.

nnn is a really versatile file manager that has an extremely small footprint both in terms of memory usage and CPU usage.

What’s performance like on the RPI4? In a nutshell, it’s extremely good. Some actions take noticeably longer on the RPI4 than my main desktop machine, such as running the disk usage analyzer. This is probably because my RPI4 is running from an SSD over USB3, inevitably limiting bandwidth. The RPI4 is the only machine I use an SSD in this way. But it offers better performance than using a memory card.

There’s a great set of plugins available to enhance nnn’s functionality although there isn’t a Raspbian package for them. But Page 4 of my review covered how to download them.

nnn is written in C.

My other favourite console-based file manager is Midnight Commander. Why do I like it?

Partly because it’s simple and intuitive to use, and makes excellent use of the terminal screen space.

I’m more than satisfied with the performance of this file manager on the RPI4. It runs really smoothly on this tiny machine.

The current release of Midnight Commander is version 4.8.24. The Raspbian repositories host version 4.8.22. Not too bad.

Like Midnight Commander, Vifm offers an attractive curses-based interface. If you’re a fan of Vi(m), and looking for an environment for managing your file system, you might prefer Vifm.

There’s a package for Vifm in the Raspbian repositories. You get version 0.10 which was published in November 2018 which misses out on a few enhancements from the latest version 0.10.1 (published July 2019), but nothing too major.

Like nnn and Midnight Commander, Vifm is written in C.

This file manager offers a curses-based interface, and has it’s own file launcher called rifle.

Performance of Ranger with the RPI4 was perfectly satisfactory, although opening uncached directories with large number of files wasn’t quite instantaneous.

Raspbian’s repositories host version 1.9.2 which was released back in September 2018. It’s not the latest version, with version 1.9.3 released in December 2019. Version 1.9.3 added tons of useful features such as previews for extra file formats, additional filters, and additional functionality to rifle.

Depending on the model of the RPI4, memory consumption can be an extremely important consideration when choosing which software to run on this tiny machine. With a maximum of 4GB of RAM, it’s quite easy to start swapping if you run lots of software (like I do).

As the chart above illustrates, all of the console based file managers are extremely lightweight. nnn is amazingly frugal, but bear in mind that if you want to replicate dual-pane functionality, nnn needs a terminal multiplexer, together with two running instances of nnn. In that situation, Midnight Commander easily pips nnn to the post.

While I perform most of my file management activities at the console, you might prefer a GUI based file manager. If you have difficulty remembering keyboard shortcuts, find it easier to perform certain activities like drag-and-drop with a graphical interface, or graphical software is just ingrained in your soul, a GUI based tool might be the ticket.

Krusader is widely regarded as the best open source GUI-based file manager. It’s a twin-panel application by KDE, although you don’t need to be running that desktop environment.

Here’s Krusader showing its disk usage functionality. I’m showing the size of files in /usr/bin. It has more than 2,000 files in this directory alone. It’s actually quite slow to display this information, far slower than say nnn. But most operations with Krusader didn’t cause any issue from a speed perspective. A definite success on the RPI4.

Raspbian hosts version 2.7.1 of Krusader, which is one release behind the latest stable version.

Dolphin is another file manager designed for KDE but runs on other desktop environments.

Dolphin feels noticeably sluggish on the RPI4 in comparison with many of the file managers featured here.

I was disappointed with the overall performance of Dolphin on the RPI4, whereas with a machine with more grunt, I have no major complaints. I’m a big fan of Dolphin, but not on this tiny machine.

Raspbian’s repositories sadly host version 18.08.0. That’s an old release, published in August 2018. The current stable release is version 19.12.1 and has tons of improvements.

Dolphin is written in C++.

Unlike the 2 previous programs, PCManFM is a GTK+ based file manager. Like Dolphin, it’s a navigational file manager.

PCManFM feels even more sluggish than Dolphin. For example, it’s glacial at displaying directories with large number of files, such as /usr/bin/.

Raspbian’s repositories host version 1.3.1. That’s the latest stable release, although there hasn’t been a new release since December 2018. 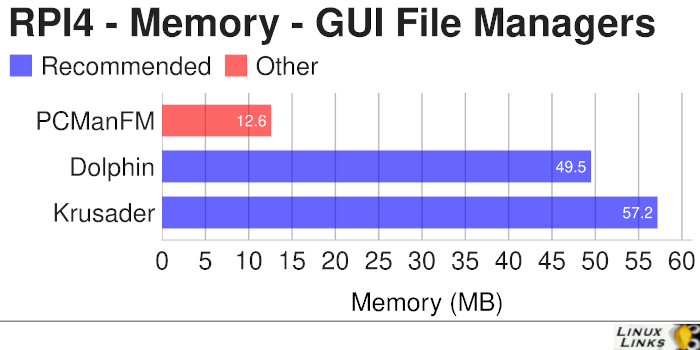 Even though you’d expect a GUI file manager to have a larger memory footprint than its console counterparts, PCManFM actually is more frugal with your memory than Ranger. Whatever model of the RPI4 you have, or intend to use, you won’t have any issues with any of the file managers in isolation.

There’s a good range of open source file managers available in Raspbian’s repositories. Most of them work admirably on the RPI4, although I have performance concerns about Dolphin and PCManFM.

Overall, I prefer nnn and Midnight Commander when I’m at a terminal. For a great graphical experience, look no further than Krusader.

None of the file managers have a large memory footprint. All are stable in operation.

I acknowledge I should explore more GUI-based file managers. I will look at some others at a later date, including Nautilus, the official file manager for the GNOME desktop.

Read all my blog posts about the RPI4.

This blog is written on the RPI4.